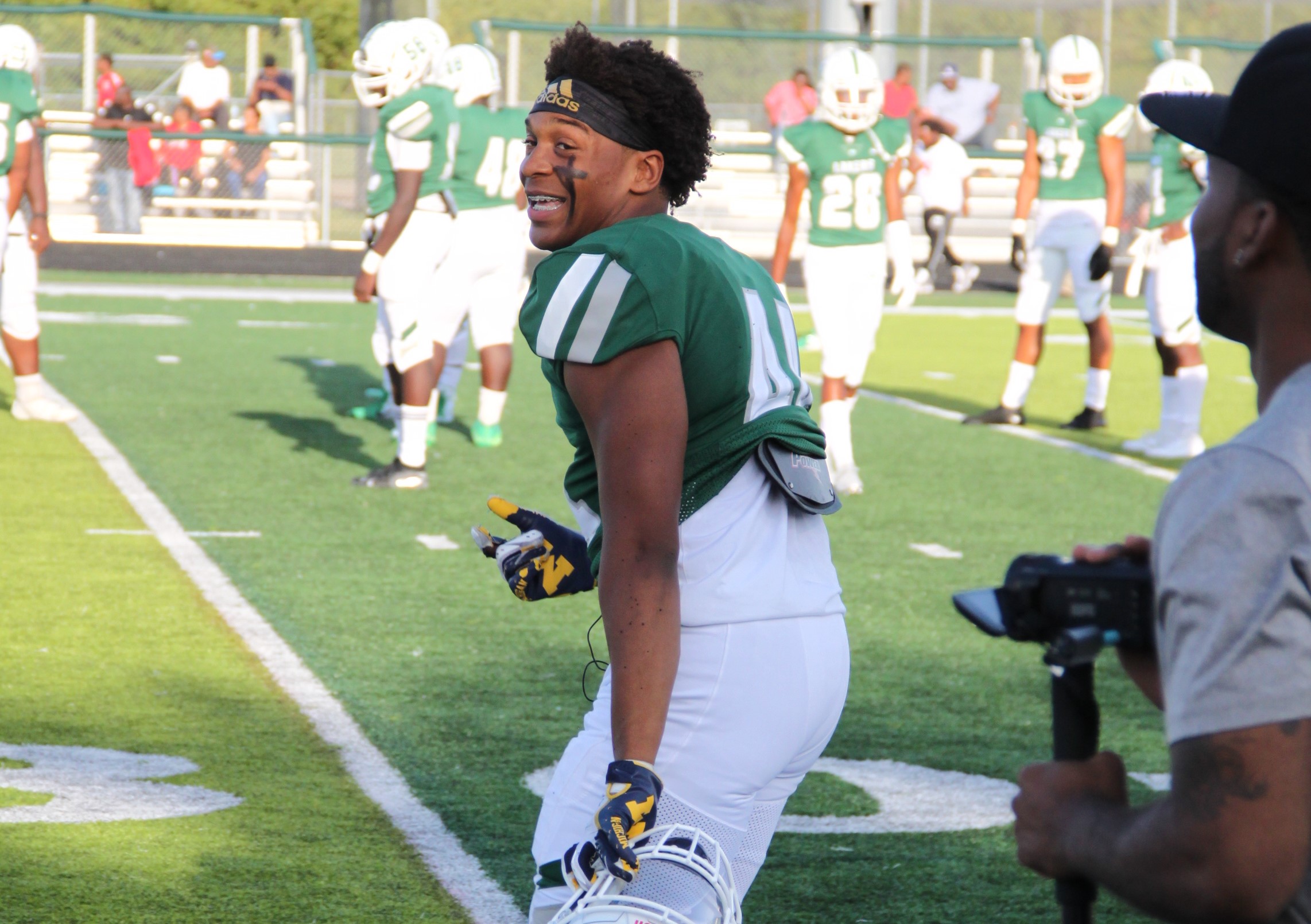 This week we shift our focus over and a couple yards closer to the line of scrimmage as we look at Makari Paige’s West Bloomfield teammate, 2020 MLB Cornell Wheeler. One of the mainstays of the class, Wheeler is one of three players who committed before or during the 2018 season. He picked up a number of offers in April and May 2018, with Kentucky, Missouri, and Iowa State the most notable. A good portion of the Big Ten—MSU, Minnesota, Indiana, and Nebraska—also threw offers his way.

Wheeler’s ranking has fluctuated a bit but has generally fallen somewhere in the mid- to low-400s in 247’s composite. He’s a composite three-star with 247 the outlier; they have him rated 86.0 (his composite rating is 88.2) and ranked #759 overall. So where does it look like he should fall? We turn to the tape for more insight.

[Hit THE JUMP for every-snap film and scouting]

[00:00] Wheeler is attempting to stack-and-shed here, but it’s more of a stack-and-get-held. He reads the cut, sees which gap the ball carrier is headed for and is attempting to get there.
[00:25] Nice short-area quickness on display as he sidesteps the OL coming free to the second level and hits the open gap quickly, which forces the back to bounce.

[00:44] DL opens the gap for him and Wheeler gets through quickly, but then slows in his backside pursuit.

[00:54] Inconsequential due to the fumble that allows everybody else to get to the QB but the OL are just holding the heck out of him.

[1:42] Patiently waits for the back to declare his gap while ensuring he has contain, then regaps to match. Does a nice job sidestepping a blocker again.

[2:09] He’s blitzing; this is the fastest he’s looked all night. Fast, but not elite speed.

[2:57] He has a quick first step when he knows he’s matched up with the back. Feel pretty comfortable with him in the box, especially containing and making sure things get forced back in.

[3:07] The aforementioned play is in contrast to when he plays zone. He’s got no one he needs to cover but hesitates before going after the QB. There’s a second there where I think he gets the sack if he just takes off after him, but one too many hops and he can’t get there. LB play experts, maybe I’m wrong here, but it seems like he either needs to stay back the whole time to break on any outside run or (once he sees all receivers are behind him, not crossing) avoid drifting forward and run through to the QB. He shows good recovery speed, though, and takes the right angle.

[3:18] Excellent play. Sheds the blocker and tracks the back, then makes the hit despite getting his jersey pulled again.

[3:44] Not the subtlest blitz conceal here, but he really hits the gap and breaks down quickly. Very fast when heading downhill. The RG does an incredible job picking him up or this is a TFL.

[4:05] Withstands the block. Doesn’t shed it, but does get off enough to assist on the tackle.

[4:21] The RB makes a bad decision here. Decides to play his foot and cut into Wheeler’s gap, and he practically teleports forward to make the tackle.

[4:28] I’m not sure what he sees that causes him to run to his right, but it’s not the RB. The QB gets flushed and flips to the RB, who now has extra space thanks to Wheeler’s miscue. He again takes a good, safe angle and communicates when he sees guys under him (in this case Paige) who could make a play on the back before Wheeler can cut him off.

[4:44] Gets into the open gap and accelerates to the ball carrier with very good speed.

[4:52] He does a fairly good job mirroring the QB’s steps, and it’s why he’s able to get an arm on the QB after the spin move. Nice wrap on the tackle.

[5:03] Wheeler is five yards off the line of scrimmage and gets to the QB in about a second and a half on a straight-line blitz. He’s fast enough to disrupt the QB’s progression.

[5:28] Reads the give and gets outside quickly. Wheeler has very good run-game instincts; here you can see him turn his path downfield so he takes a better angle to the runner.

[5:53] This is the fastest Wheeler has looked all night. He squeezes through a gap that’s barely there without losing speed.

[6:42] I’m again left wondering why he holds his zone as long as he does but he does make the decision to go after the QB in time to be in position to sack him as he’s flushed from the pocket.

[6:54] Conceals the blitz very well and again shows a nice burst through when he’s running straight through the line to the QB.

[7:03] Play goes away from him but Wheeler takes the OL’s block head on and sheds it easily.

[7:12] Same zone coverage issues as above; my takeaway here is the burst once he has the QB in his sights.

[7:27] Best zone work of the night. He sees that the receiver nearest him is breaking out, so he takes off after the QB. Wheeler redirects smoothly as the QB jukes his way out of the pocket. Wheeler is one really nice last-second cut by the QB away from making the tackle.

[7:39] Runs through the guard’s block attempt, but that slows him enough that he’s a step behind the back and gets run past.

[7:50] Kind of a fun play. Wheeler breaks down and prepares to shed the block, but the FB sees him in the hole and has no interest in taking that on. He gives a little shoulder shove and Wheeler bounces off of it and over a gap to make the tackle.

[8:45] It doesn’t end up mattering that he ran to his left but I’m not sure why it happened and it could have been consequential if not for backside pursuit.

[9:26] Good communication as he passes off his guy, nice job coming down again and slowing the back, then a nice angle to force the QB out on the sideline.

[9:37] Looks to me like Wheeler reads this play well. He changes direction to get upfield almost simultaneously with the QB’s decision to run. Doesn’t bend well around the OL, though, and the QB escapes.

Wheeler without a doubt projects to inside linebacker in college. He’s a downhill thumper who reads the run game well and has a good to very good short-area burst. He’s also a very good tackler in terms of effort and technique. Wheeler tipped his hand often when blitzing; he’ll have to clean his timing up at the next level. That said, he knifes through gaps quickly and is at his best when he's allowed to attack the backfield. This is where his decisiveness shines.

He did a nice job stacking and shedding or, in some cases, sidestepping blocks, which is another point in his favor as far as eventually becoming a downhill run stuffer in college. He is skilled at keeping his eyes on his assignment while taking on blocks such that he's able to track the runner and not get stuck on the wrong side of a block.

Some of his decisions with regard to when to hold his zone and when to go after the quarterback were questionable, but I’m not sure how pertinent that is to his earning playing time at Michigan since I don't think he'll be holding an underneath zone that often. He doesn’t have the quick-twitch athleticism to sniff out a screen and stick it or erase a guy in the flat but I think he’ll eventually be able to cover the flat. He may cede yards, but he won’t give up long runs thanks to his fundamentally sound angles. Time and time again he showed that he takes safe angles to get over the ball carrier when he's pursuing to the sideline; he’s not going to let things get behind him in the open field. Think of him as a bend-don't-break backer against the pass or outside runs.

Do we know if the 3-3-5 Michigan is running this year is a lack of DT's thing, or a scheme change?  Recruiting looks like a 3-3-5, and Wheeler seems like a guy who fits in that.  I assume a run stuffing plugger is ideal in that system.  Understood you want Devin Bush in any system, but does thumping at MLB get more priority in a 3-3-5 vs. a 4-3?

What the 49ers were saying after their win over the Steelers