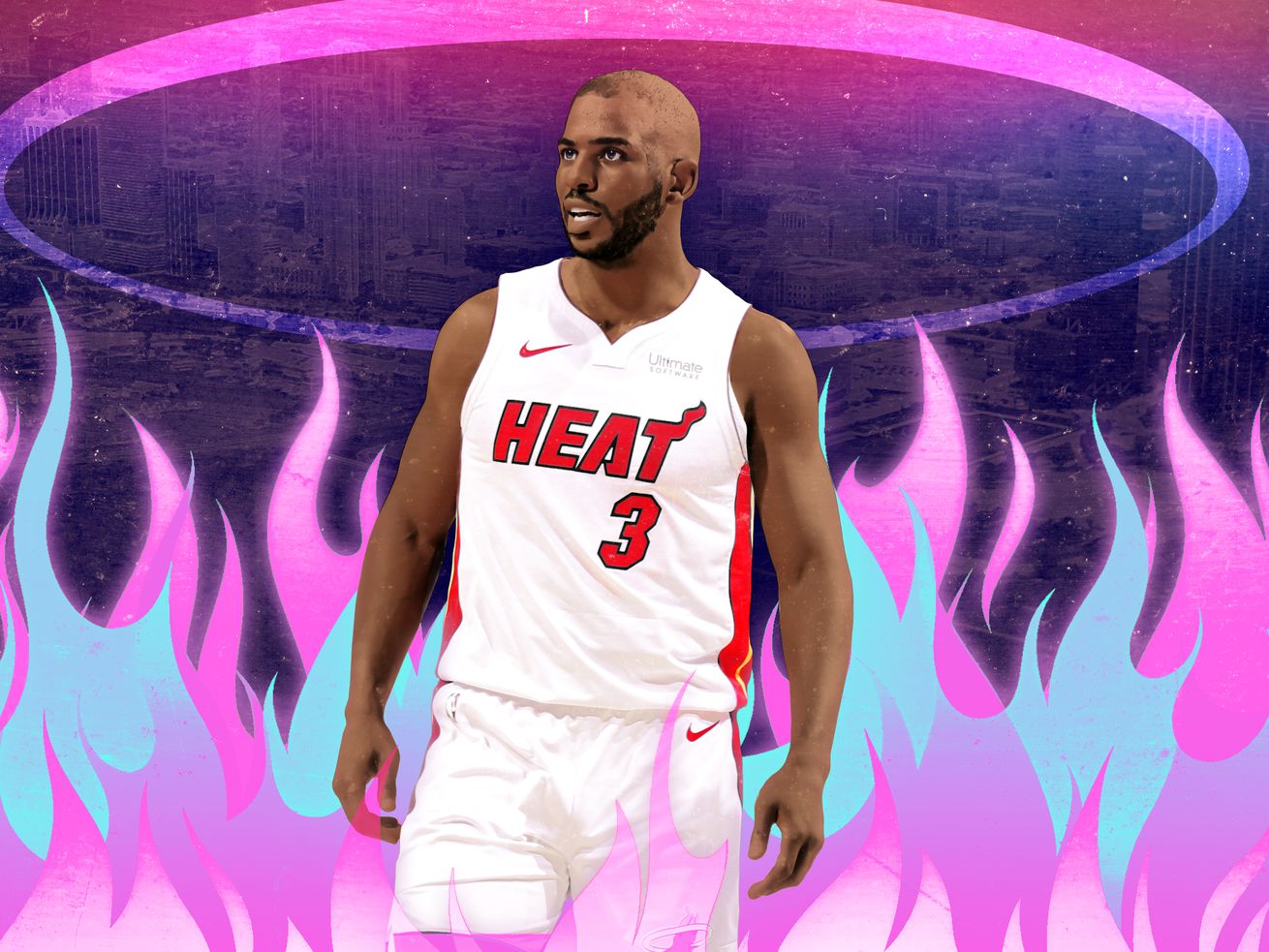 The Heat have been flirting with the idea of bringing in the Point God, but there are plenty of questions about how well he would fit with the franchise

After perhaps the wildest offseason in league history, Shams Charania of The Athletic on Monday checked in on the possibility that the player movement carousel hasn’t stopped spinning, reporting that the Miami Heat “have a level of interest” in pursuing a trade with the Oklahoma City Thunder for Chris Paul. This, in and of itself, is not really news. For one thing, we all have “a level of interest” in lots of things we don’t actually do. (I have “a level of interest” in what skydiving feels like, but I’ll be damned if I’m really getting into that plane.) For another, we already knew that the Heat and Thunder reportedly discussed a Paul deal, shortly after he landed in OKC in the blockbuster July swap that sent Russell Westbrook to Houston.

How far those discussions got, though, remains unclear. ESPN’s Adrian Wojnarowski reported that the Thunder didn’t “feel a need to surrender draft compensation to unload Paul’s contract,” which will pay the 34-year-old point guard $79.9 million over the next two seasons, and includes a $44.2 million player option for the 2021-22 campaign. Barry Jackson of the Miami Herald, on the other hand, reported that while the Heat would “listen and do due diligence on the matter,” they wouldn’t be interested in sending more than matching salaries in a package—and, in fact, “would need to be absolutely overwhelmed” by what Oklahoma City general manager Sam Presti was willing to offer them in the deal.

Add that to the scuttlebutt about why earlier talks between the Thunder and Heat on a Westbrook deal fizzled—OKC reportedly asking for “multiple young, valuable assets” from Miami, rather than sending any—and you can connect the dots on why a potential CP3 transaction stalled out. As it stands, then, it’s more likely that CP3 begins the new season in a Thunder uniform than that he takes his talents to South Beach any time soon; Charania wraps the item by saying Miami “will likely elect to see how it starts the season before gauging a new pursuit” of Paul.

As hot stove talk goes, this seems more like keeping the pot simmering than cranking up the burner. And frankly, low-and-slow might be the right play for the Heat—even though, despite seeming to lose a step last season, Paul would likely represent an upgrade over any of Miami’s other top ballhandling options.

Goran Dragic has been productive when healthy as a member of the Heat, but he battled injuries throughout last season, will turn 34 himself in May, and isn’t at Paul’s level. Justise Winslow impressed when forced into duty as a full-time lead guard last season, but Paul offers a brand of playmaking precision and passing acumen that the at-times-frustratingly-positionless former first-round pick can’t match. As others, including my Ringer colleague Kevin O’Connor, have noted, there’s reason to believe that Paul’s effectiveness, efficiency, and overall production could all improve if he’s installed as a primary creator in a more egalitarian offensive system than the isolation-heavy, your-turn-my-turn attack he shared with James Harden in Houston over the past two seasons. As one of the league’s preeminent hard-ass floor generals, it also seems like Paul would be a hand-in-glove fit in the Heat’s well-established hard-nosed culture.

It’s worth wondering, though, how well Paul would fit with the other famed hard-ass the Heat just imported. Jimmy Butler could have secured a full five-year bag to run it back as one of several stars on the 76ers; instead, he took a four-year, $140.8 million contract to be the unquestioned no. 1 option for a Heat franchise that hasn’t won 50 games in a season or made it out of the second round since LeBron James left town. Now, if they brought in Paul, Miami would be adding another max-salaried marquee player whose bids for glory in both Los Angeles and Houston came up short after grumblings emerged about the “mentoring” he offered to his costars. Is Butler—no stranger to, um, complicated exits himself—going to be on board with sharing the spotlight he thought he would have all to himself? (Also, for what it’s worth: As I’ve written, I’m optimistic that a healthy version of what’s already in the Heat locker room might be good enough to be the third or fourth seed in the East. Would a 34-year-old CP3 make them a legit contender on par with the Bucks and 76ers at the top of the conference? I’m skeptical.)

Even if Jimmy’s willing, it’s reasonable to wonder whether the upgrade Paul might offer is worth the risk of taking on his long-term financial obligation. Dragic’s $19.2 million contract comes off the books next summer, but the real target date for the Heat to make a big splash is 2021, when the deals of James Johnson, Kelly Olynyk, and Dion Waiters all fall off, too—just in time, as luck would have it, for one of the most star-laden classes in recent memory to hit the market. Are Pat Riley and Co. willing to bet that Paul, at age 36, will choose to decline his $44.2 million player option that summer, allowing the Heat to maintain maximum flexibility to hunt the franchise’s next cornerstone star? If you don’t get some kind of wink-wink-nudge-nudge assurance in that direction now, is the potential of being a bit more competitive over the next couple of years worth squandering that kind of opportunity in two years’ time?

Maybe the brain trust in Miami thinks it is. Maybe, after a largely underwhelming stretch since the end of the Big Three era, they’re thinking more about doing what they can to maximize their competitive window with Butler right now, while he’s a top-10-caliber player, because who knows whether he’ll still be at age 32 and 33? As glamorous as that 2021 class might be, two years is a long time to wait, and free agency is a zero-sum game; playing the trade market now at least ensures you get something in return. The question in this case, though, is whether what the Heat would get with Paul is a reward worth the risk that stepping up their “level of interest” would demand they assume.

The 2019 NFL season is already over for these 10 teams