What the 49ers were saying after their win over the Steelers 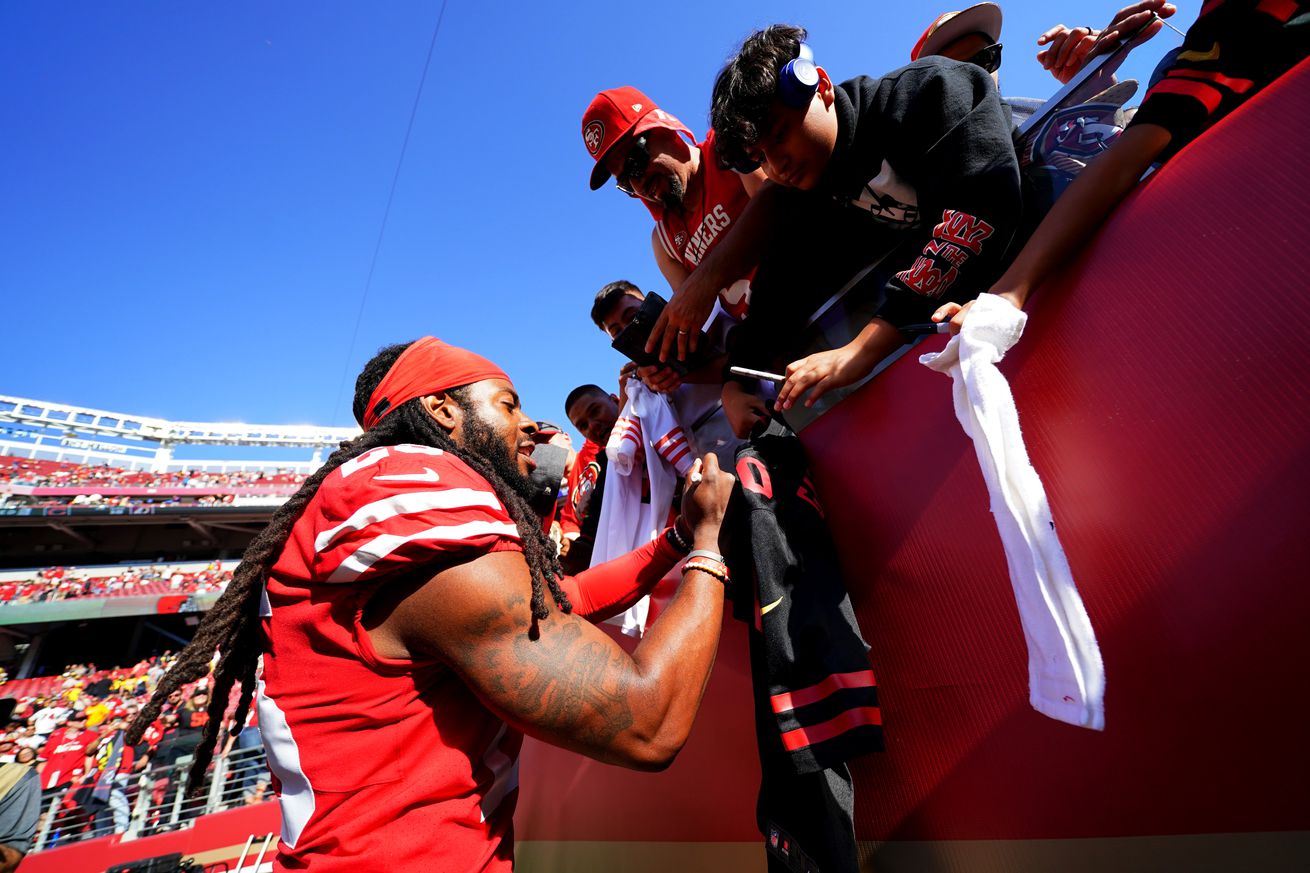 The top quotes from the 49ers postgame press conference

Sunday’s are always a good day when the San Francisco 49ers win. After the game, head coach Kyle Shanahan, and a few of the players spoke to the media. Here are some of the best quotes from Sunday’s postgame.

What does it say about the team that you’re now in that position where you can lose the turnover battle like that and still come out with a victory?

“These were the biggest ones. Everyone knows how well Cincinnati went, but the game today and the game in Tampa, those are games that we have not been able to win here. And, to have two games like that where things don’t go perfect, says a lot about the character of the guys in there. I think we have been better in how we’re playing, but it also says, our guys are mentally a lot stronger. They were pretty relentless through everything. They didn’t waiver at all. They were excited at halftime. They were excited in the third, and obviously, they were really excited when we got back in.”

“Yeah, that is good, but that doesn’t mean anything. I’ve been 5-0 and not made the playoffs before, so that doesn’t mean much. Especially, having a week off here. I know bye weeks are not fun after a loss, so to win one that way, we’ll get two good days here in with practice. We’ll get away for a little bit. Bring the guys in. We’ll get a couple extra practices in since we’re going on Monday Night. Give us a chance to heal up, but can’t wait to get right back.”

What’s been happening behind the scenes that enabled WR Dante Pettis to get the start tonight?

“He’s just gotten better each week. We all know how he finished last year. Had a few bumps in the road throughout training camp, which I think has been well documented and I talked about. But, I’ve been extremely impressed with how he’s responded since the first week of the season. He’s taken the challenge. He’s been working as hard as anyone on our team. He had a really good week last week and he came back and was even better this week. I see [WR] Deebo [Samuel] in, we were going to start Dante last week based off his practice, but the first two plays we did kind of changed our mind on that because of something we wanted Deebo in for. Dante earned it and helped us out today.”

With all that being said, what went through your head when the pass banged off his hands and got intercepted?

“Not much. It was a bang, bang play. The ball was in the middle instead of on the right hash. We were about two yards too wide with our split. It’s a very quick throw, where you just plant and throw and it just went off the tip of his fingers. Wish he would have had a little tighter split on it. I think it would have been in his hands. It wasn’t like he eased up on the play. I didn’t think it was a bad drop. Anytime the ball touches your hands though, he has the ability to catch it. I think that was just football.”

How do you think OL Justin Skule did out there today?

“The fact that I didn’t talk about him much throughout the game, I think he did very well. I’ve got to watch the tape and see exactly. I didn’t talk about him really all day. I know he had those two penalties, which I couldn’t really tell what he did on them. Not that I was watching him either. But anytime you go through a whole game like that and you’ve got a rookie starting for his first time and the play caller isn’t bringing up his name left and right, what happened, that means he did a pretty good job.”

CB Richard Sherman said that he thinks you like getting hit because it wakes you up a little bit. Would you say that’s accurate?

“I’ve been told that before. I don’t know. I’m a football player. It’s part of the game. You just take it as you go, I guess.”

How are you feeling afterwards? You did take a few hits.

“I’m feeling awesome. We had a win, man. Whenever you get the win, you always feel good.”

What do you think it says about this team that you kind of found different ways to win in each of the first three weeks?

“It’s a mindset that we have in that locker room. It’s a great group of guys, great coaches, and I think it starts from the top down. We know what we have, and we just have to go prove it on the field now.”

“Yeah, it’s weird. I’ve never had a bye this early. It is what it is type thing. Got to go back, have a good week of assessing ourselves and get ready for the Monday night game.”

Having two plays where I think you escaped three sacks per, just spinning out, spinning out. How much confidence does that give you if you didn’t have it already in your leg given that you were able to break out of those?

“Leg’s felt good. I haven’t really had any issues with it this whole time. Wasn’t like it proved anything to me, but it’s a good confidence booster, I guess. I don’t know”

Some of the other offensive guys said late in the game they have a different type of confidence in the defense because of some of the new additions. Can you elaborate on that and what that feeling is when the defense is out there?

“I think the crowd felt it, especially on that last, whatever, one-minute drive. Those guys up front that we’ve got, they’re some dogs and they get after the quarterback and they make it hard for them back there. When we got that lead, we felt pretty good about it.”

Those guys picked you up a few times, obviously, with the turnovers in the first half. After they gave up the 76-yard touchdown, you guys put together a drive and scored. What was the mindset going into that drive of “hey, it’s our turn to pick them up?”

“That’s what I was kind of saying before, just the mindset of the locker room. It’s complimentary football, especially when we turn the ball over early and they only got six points out of it, and then [CB] K’Waun [Williams] gets the huge interception at the beginning of the second half, we go down and score. All that stuff, it’s how you create a good football team. We’re getting there.”

“Nothing, honestly. Dante’s phenomenal in practice. I know you guys aren’t seeing all that and everything, but he battles his ass off in practice. Great mindset of when his number’s called, he’s ready. You’ve got to appreciate a guy like that. Having all that competitiveness, you love to see it as a quarterback, because you can trust that then.”

Kwon on the mindset of the defense

What is the mood on the sidelines when the offense gets another turnover and you guys are going out on the field again?

Armstead on the defensive line

On the defensive line, this front seam, you’re three games in, it seems like more and more plays are being made by you guys.

“Yeah, I think we’re barely scratching the surface too. You know, we’re still finding our groove and getting comfortable with each other, but we have the mindset to stick together and fight through our games. You know, we put it on us to go out there and get the job done.”

Juice on what he learned about the team

What did you learn about this team, in finding ways to win?

“I feel like this team is resilient, there is confidence in ourselves. Even when things are going bad, we know that we can turn things around. I am so impressed with our defense, I think that our defense is so legit and we can play with anybody. On offense we just have to clean up the turnovers. There is two ways to look at this game. You can focus on the negatives and on all of the turnovers but at the same time you can look at the positives like wow we had all of those turnovers and we still won this game. Think about if we clean those up.”

Sherman and his one-liners

How was this team able to win while turning the ball over five times?

“It’s just resilience. It’s growth. It’s growth from offense, defense, special teams, because it takes three units to win a ball game. That’s what we did tonight. We showed that all three units had trust in one another, all three units picked each other up when the other fell apart, and that’s how we were able to win the game. It was trust and you appreciate games like that. Me as a nine-year veteran, I can appreciate games like this. I’ve been in quite a few of them, and how you respond to these games goes a long way to how your season goes. I think our men responded well.”

Ahead of today’s game, you called for the fans to come out today and be loud. It seems like they did that. How did that energy play into the win today?

“It had a great impact. Niner gang, we appreciate you guys. We went out there and fought for you. It’s not always pretty. It’s not always going to be a blow out and just get to sit comfortably in your seats and drink. Sometimes, we’ve got to keep you on the edge of your seats. Got to keep you involved, got to keep you in the seats, you know. That’s what they told us. But, we appreciate you guys sticking through, being loud, being proud. 3-0 for the first time since ’98.”

“One thing we pride ourselves on is being the same, regardless, good, bad or indifferent. You have to approach the game the same way. It was probably more enthusiastic when we got the turnovers than it was when we didn’t. Like when our offense gave up a turnover and put us in a hard spot, we took it as Murphy’s Law. We took it as Murphy’s Law, and you want to slap Murphy in the face, and we did that today. We took Murphy’s Law- everything that can go wrong, will go wrong. You take it with a smile, and you go out there and preserver, and that’s what we did today as a defense. That’s what our offense did and that’s what our special teams did today. That’s what we did as a full team.”